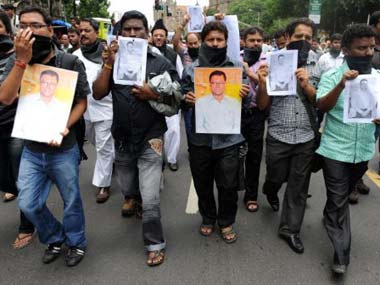 Mumbai’s crime reporters have always faced grave risks in the line of duty. The shocking killing of veteran newshound J Dey is another reminder of how vulnerable they, reports Pratik Mukane.

On the mean streets of Mumbai, fear is the key. The mood of foreboding among the city’s journalists is so thick that it can be cut with a knife. Following the killing in broad daylight of veteran crime journalist J. Dey, questions are being raised about the safety of newshounds on the trail of underworld goons and crooked cops. Those in the know assert that journalists on the Mumbai crime beat are particularly vulnerable to murderous assaults because the mafia dons have barely disguised links with the police force and  powerful politicians.

Most Mumbai crime journalists are reluctant to speak their minds as they have been firmly instructed by their editors to keep their views to themselves. But several senior scribes who are aware of the situation on the ground assert that Mumbai’s crime reporters have no support system. They are generally left to fend for themselves when trouble erupts. They receive little support from their employers by way of formal training. The police, too, provides them no protection, a fact that was brutally exposed by the shocking J. Dey murder.

Says Milind Kokje, executive editor (languages) of India.com: “Working journalists here are given no training in how to report in hostile environments. Defence correspondents do sometimes undergo formal war coverage training, but we are usually extremely cavalier about these things because journalists here do not face war-like situations except probably when they cover communal violence.”

Kokje points out that BBC conducts a ‘hostile environment training’ course for all journalists who are sent abroad to cover conflicts. American news channel CNN and the news agency Reuters do pretty much the same with personnel who work in war zones.

It is important to note that CNN makes no distinction between a staff member and a freelance scribe. Whether a journalist works full-time for CNN or is only on contract, he is put through an exhaustive training drill before being sent out on a potentially dangerous assignment.

Indian media organisations, on the other hand, do not usually invest in preparing their reporters and photographers for the risks that they routinely face when they go out into areas of operation where they might end up provoking the ire of the powerful and the ruthless, as Dey probably did.

Sources point out on condition of anonymity that “during the 26/11 attack, only reporters representing Reuters had bulletproof jackets and helmets to protect themselves”. Indian reporters at the spot had no such equipment. Moreover, they were sent into the field without any formal training in matter of covering a terror attack and its likely fallout.

So, how tough is it being a crime reporter in a city where the underworld holds sway? Senior journalist Mahesh Mhatre says, “It is pretty difficult as there are too many blind spots in this field. The mafia has become active all over again because there is huge money in real estate. The construction industry is controlled by builders, the police and greedy politicians. Crime journalists are out there on a limb and there is nobody really keeping a watch over them, least of all the people that are in positions of power. Journalists have never been more vulnerable.”

“The degree of risk that a journalist faces depends entirely on what kind of crime reporting he or she does. If all you do is go to the police station and faithfully report the briefing provided by the men in uniform, you face no risk,” says Kokje. “But if you happen to be someone like J. Dey, bent upon ferreting out information that could lead to embarrassing exposes, then you are asking for trouble.”
Says Mandar Phanse, senior journalist with Network 18 and news editor of IBN-Lokmat: “Crime reporters in Mumbai are at par with the best in the world. They are an aware lot. But stiff media competition has forced them to get dangerously close to the crime frontline. With the police-underworld nexus running deep, these journalists are up against an alarmingly increasing degree of danger.”

Phanse feels the question of lack of awareness and planning does not arise in the case of J. Dey for he was a crime beat veteran who knew the dangers that he faced. “If anything,” says the journalist, “Dey paid with his life for being a man who knew too much about the underworld. He was for sure a thorn in the flesh of many. Had a journalist covering the 26/11 attack died in an explosion or sniper fire, that could have been blamed on lack of training and awareness. Dey’s case was completely different.”

“In India, journalists are not trained to understand the consequences of their reportage seriously. A few years ago, I had done a story on the money-lending business run by the Congress MLA from Khamgaon Dilip Sananda and his family in Maharashtra’s Buldhana district. But I did not get any police protection. I could survive just because of my personal contacts. In India journalists have to work at their own risk and take care of their own safety,” says Mhatre.

Dey’s murder has raised fears about a resurgence of the underworld in the city and the growing threat to journalists. But even after several attacks, media outfits have done little to protect their employees.

Sanjay Ranade, journalist and former head of the mass communications department of Mumbai University, says: “In the Indian media industry, there is no ‘organisation’. Media houses are not editorially inclined and are more interested in the business. No media organisation pours money into providing training to their employees.”

Today, India ranks 13th on the list of countries where journalists are most at risk, according to a study by the global Committee to Protect Journalists (CPJ). Iraq ranks first on this list, followed by Philippines, Somalia, Sri Lanka and Colombia. Pakistan ranks tenth.

According to News-X channel reporter Rahul Dubey, “The media is a part of the social sector, and should therefore be covered by a physical security insurance on the lines of health insurance. We often deal with grave danger. We must get greater security.”

Says Dubey: “The situation has become pretty grim today for a crime journalist. People are often out wreak personal vengeance. Whenever journalists have tried to expose scams, especially those related to land deals, they have faced attacks.”

In June 2009, four mediapersons were manhandled in Parel by men allegedly owing allegiance to the Bahujan Samaj Party. Zee News reporter Amit Joshi was brutally assaulted by local goons while he was covering an incident. But the company did not provide him any personal security though he did receive prompt medical aid. Says Joshi: “When cost-cutting is the industry-wide norm, you cannot expect media houses to provide training and protection to journalists.” The message is clear: if you want to be a crime reporter in Mumbai, you’ve got to be very, very brave and smart enough to stay out of the line of fire of that sharpshooter on the loose.