AGE BAR UP FOR TIPPLERS 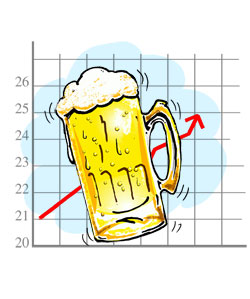 Maharashtra, with its many breweries, vineyards and healthy pub culture, has decided to make consumption and purchase of alcohol illegal for youngsters below the age of 25. The existing age limit is 21 years.

Maharashtra, with its many breweries, vineyards and healthy pub culture, has decided to make consumption and purchase of alcohol illegal for youngsters below the age of 25. The existing age limit is 21 years. However, wine lovers can breathe easy as the consumption and purchase of wine have been kept outside the purview of the restrictions. The minimum age for drinking or purchasing beer has been fixed at 21, up from 18 and hard liquor from 21 to 25. The new policy will come into effect as soon as the notification is issued.

It is not known if the restrictions on alcohol and beer were applicable inside the home too. Some officials said the matter was “vague” as of now. The decision that was taken in a state Cabinet meeting sparked angry reactions from youngsters. Ruia College student Uttaresh Venkateshwaran said: “The law looks good on paper. But there is always a loophole. Youngsters will certainly adopt illegal means to lay their hands on alcohol. Also, the authorities will face difficulties in executing the new changes.”

Bar and liquor shop owners, who see it as yet another move to burden the liquor industry, have demanded a rollback. Terming the decision “unconstitutional”, Manjeet Singh Sethi, president of the Fight for Right Bar Owners’ Association, said: “Bar owners would move court and take to the streets if it was not rolled back.” Also, Sethi questioned how the age restrictions would be implemented by officials. “How will they prove that someone is 25 years old or younger?”

According to Priyanka Ketkar, content executive Twilight Entertainment, execution comes later, the law itself does not make sense. She said: “If a boy and a girl are eligible to get a license at 18 and get married at 21 (which is a huge decision), then they definitely even are capable of deciding what is good for them and what is not. The government should make stricter laws for drunk driving, not drinking. It is better to ban cigarettes (not just for any age groups) but generally.”

Laws are made, but as such no provision is made which will bind people to follow them, claimed Ketkar. “To stop people from spitting at public places, the government made Anti-spitting law, but it is not followed. Considering their birth right, many people even now spit at public places.

Surprisingly, the government too has failed to take action against such people,” he said. According to 21-year-old, Apurva Tupdale, banning alcohol for 25 years old, would just encourage more people to consume liquor illegally.

“Although the decision is welcome it should also be seen to it that the rules are implemented. The young generation is too prone to exploit the law,” she further added. If the government is so keen on stopping everyone from drinking and smoking then why not just stop the production, she asked. Those who supported the decision in the Cabinet meeting must have the answer.