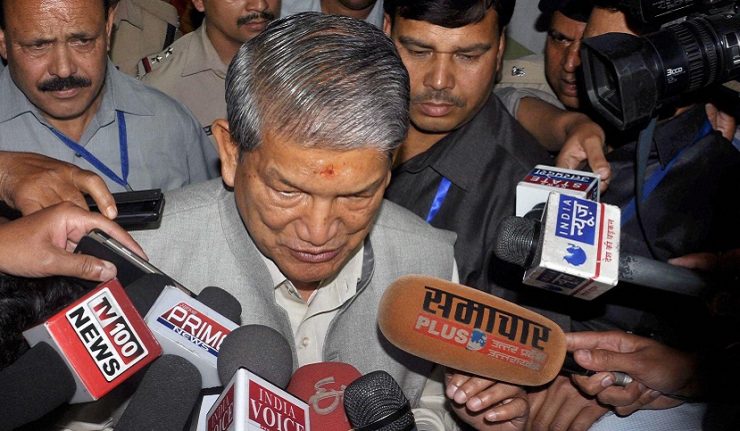 Even as it loses ground on the national front, the Congress party on Saturday lost the fight to preserve one of its few bastions in the North as ‘confident’ incumbent Uttarakhand Chief Minister Harish Rawat failed to stem the tide against the Grand Old Party.

In a bitterly fought electoral battle for 70 assembly seats, marked by a high-pitched campaign by Prime Minister Narendra Modi, the people in the hill state voted for the ‘mandate for growth and development’ giving Bharatiya Janata Party (BJP) the edge over the Congress. The BJP has won 58 seats, while the Congress party won a mere 11 seats, down from 32.

Compared to the 2012 election, the BJP has won 26 more seats, while the Congress party has lost 21. The margin of victory or defeat between the BJP and the Congress has always been less than 2%. However, this time it has increase by over 13%. 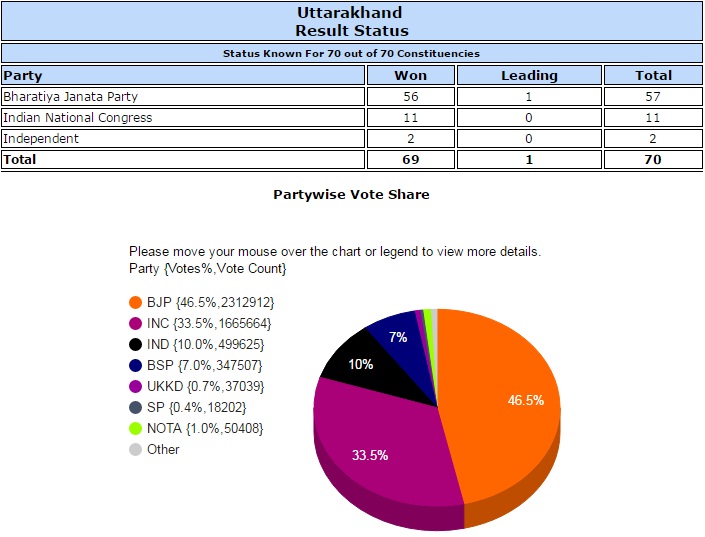 In what could be more worrying for the Congress, Chief Minister Harish Rawat failed to win even after contesting from two seats. Rawat fought from Kichcha constituency in Udhamsingh Nagar district and Haridwar (rural) in Haridwar district.

Since it was carved out of Uttar Pradesh in 2000, the state has seen eight chief ministers and no party has won back-to-back elections. ND Tiwari, who joined the BJP in January, has been the only CM to serve a full term.

Though the Congress managed to come to power in Punjab and is in a close race in Manipur, winning another Congress-ruled state even after the highly-criticised demonetization drive will only make PM Modi’s call for make a ‘Congress-mukt Bharat’ more stronger.

HERE IS WHY CONGRESS LOST THE BATTLE

⇒​ Modi wave is back

There may be different opinions, but one cannot disagree with the fact that the ‘Modi wave’ is still very much intact. After the humiliating defeat in Delhi Assembly elections where the BJP won only three seats and lost the plot to JD(U)-RJD-Congress-led ‘Mahagathbandhan’ in Bihar, another Modi wave is back in the country. It was widely expected that the demonetization move would be a huge blow to the saffron party, but the effect so far has been only been the opposite. It was evident when the party first swept Chandigarh Municipal polls just 20 days after the note ban move was announced, followed by a victory in Gujarat and Odisha Panchayat polls, and most recently in Maharashtra corporations, where it lost the hold of the richest civic body to Sena by just a handful of seats but won most other civic bodies across the state.

⇒​​ Rebellion and infighting within Congress

It won’t be completely wrong to say that Congress leaders themselves are hurting the party’s prospects. This trend was seen in Maharashtra during the Assembly elections as well as in the Brihanmumbai Municipal Corporation polls.

In Uttarakhand, too, nine Congress MLAs, including former chief minister Vijay Bahuguna, who was replaced by Rawat after 2013 disaster, defected to BJP. The state witnessed a political turmoil, even as it was battling key development issues, triggering a constitutional crisis.

If this was not enough, differences were also brewing between Harish Rawat and Uttarakhand Congress chief Kishore Upadhyay. So much so that they were reportedly at loggerheads ahead of polls and had come up with a separate candidates list for over a dozen of seats. Rawat had also became a figure of controversy when the alleged sting operation showed him offering bribes to rebel Congress MLAs to support him during a floor test. He was probably also the only sitting CM to be summoned by the CBI during its probe of a preliminary enquiry. Above all, Congress lost its leading party stalwart.

The 2013 flashfloods in Kedarnath and other parts of the pilgrimage-rich state took a toll on thousands of people, with scars of the disaster still visible. Several localities were still struggling to bring their lives and livelihoods back on track. Though the Congress replaced Vijay Bahuguna for his failure to handle the situation, it was already too late.

Ahead of the voting on February 15, 2017, PM Modi held at least five rallies in the hill state, where he also attempted to strike an emotional chord by raising the issue of surgical strike and OROP to woo voters as Uttarakhand has a sizeable presence in the armed forces. “A tea-seller has come to fight these people (Congress) against corruption. I will fight and work for poor. Will face every difficulty but won’t let anyone play with aspirations of poor,” said Modi in emotional appeal.

Even though the state is in rich in metallic and non-metallic minerals, it has remained vulnerable to disasters. Unemployment has been a major issue in the state. The state government’s inability to create sufficient jobs has led thousands of youths to migrate to other parts of the country. According to the 2011 census migration data, some 97,700 people had migrated out of the state. The data also said that a negative population growth reflected the absence of livelihood opportunities in the Hills and yearning for a better quality of life.

The Prime Minister had promised voters more employment opportunities and setting up of small-scale industries. “You need vision to encourage Bollywood to come to Uttarakhand for shooting. Like Bhutan, Uttarakhand too can gain from eco-tourism,” said Modi galvanising voters. Whether the promises would be fulfilled or not is the matter of time.

Whether it was Uttar Pradesh, Punjab or Goa – the BJP has opted the strategy of not to project any individual’s face as chief minister and going for collective leadership. The same was seen in Uttarakhand where the party rode on PM Modi’s wave. Except for Assam, the party had not project CM candidate for Haryana, Bihar, Delhi and Maharashtra.