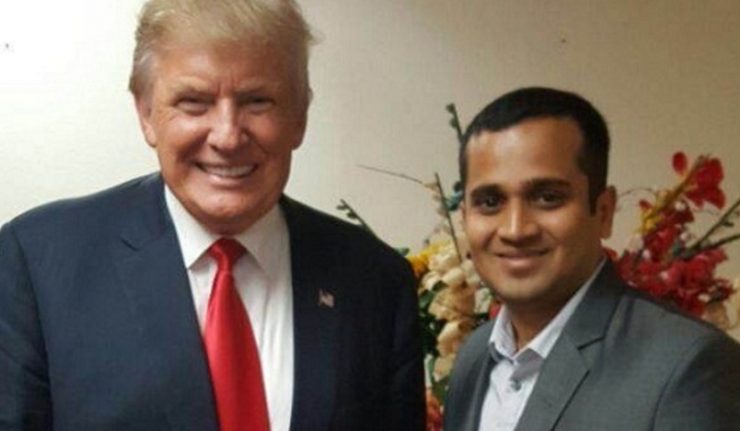 There may be differences among Republican leaders over Donald Trump, but the party’s leadership team for this year’s election cycle is focusing on victory efforts.

At the GOP headquarters in Phoenix, a young MBA graduate from India, is busy formulating strategy, analysing data and implementing crucial models for several candidates from Arizona and the party’s official presidential candidate Donald Trump. 30-year-old Avinash Iragavarapu is the Executive Director for the Arizona Republican Party and originally hails from Rajahmundry of Andhra Pradesh in India.

“My grandfather was involved in politics at the local level and since childhood, I began developing an interest in the field,” he says. Avinash’s passion for politics sustained even after he finished pursuing an MBA at IIM-Lucknow and landed a corporate job at HCL. So during the 2014 General elections, he took a break from his work and worked for YSRC in Andhra Pradesh. “I wanted to do campaign management without getting into politics or policy making. I wanted to understand what motivates people to vote and how candidates reach out to voters,” he says.

However, his career as a political strategist took shape later that year when he went to the US, where his wife works for Intel. “While driving around Arizona, I noticed the big hoardings for the Governor’s election. So I approached Doug Ducey, who was contesting the Republican primary and told him about my interest in working with him on his election campaign,” he adds.

Acknowledging his IIM background, Ducey took Avinash on board for the campaign period, to assist his team on how to spend money and what issues needed to be targeted. In November, Ducey won the elections defeating Democrat Fred DuVal and then hired Avinash on board.

“In India it is said that people from a particular castes will support a particular party, but there is no empirical criteria. Candidates are dependent on local leaders. But here we have various tools that can analyse data. Information is available on every precinct (ward) and on voters who would vote for Democrats, Republicans and independents. So we don’t need to knock on each door.”

Avinash says he helped many Republican leaders win and retain their seats with his direct involvement in campaign, due to which, in February 2016, he was promoted as Executive Director for the Arizona GOP.

Winning Arizona is important for Trump as the race to the election in November heats up, not because he has promised to win here, but because no Democrat has won the state apart from Bill Clinton in 1996. Trump had won the Arizona primary with roughly 47% of the votes. Avinash says, “We have a strong network of around 25,000 volunteers and have the strength to mobilise. Also, of the total vote share, nearly 36% votes are Republican while 27% are Democrats, therefore we have a lead margin of over seven percent.”

When asked about his experience of working with Trump, Avinash says, “I have been working Trump since January and have been with him at Ohio, Iowa and other states during the campaign. He’s very warm and interacts like a common man when the media isn’t around.”

And what about his controversial remarks? “During the general elections, even Modi had spoken about taking a hard stand against Pakistan. But after becoming the PM he went to Lahore too. Now that Trump has been officially nominated, his statements will also change,” believes Avinash.

Though Trump has blamed Indians for taking away American jobs, Avinash defends him saying, “There is no policy of discrimination. I’m the only Indian among 50 directors from 50 states, and I am treated equally,” he says.

There may be some opposition from Republican delegates like Lori Hack, who had refused to vote for Trump before being replaced, but in the end, “everyone will work for Trump’s victory,” he adds.