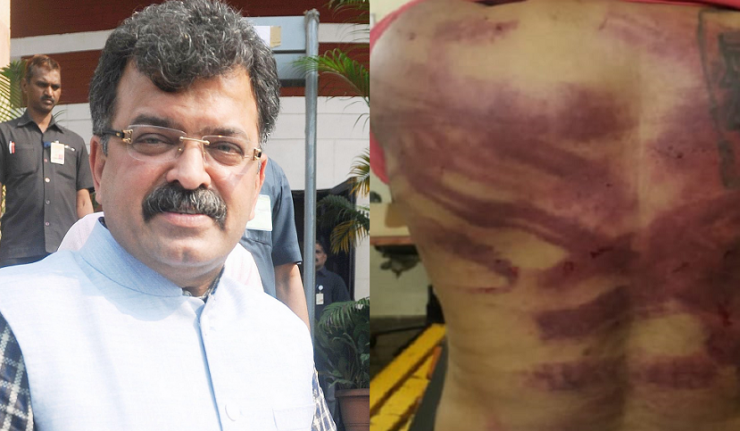 A 40-year-old civil engineer from Thane has alleged that the cops took him to Maharashtra Minister Jitendra Awhad’s bungalow instead of the police station, where his men reportedly thrashed him brutally for posting a morphed photo.

The incident took place at midnight on Sunday when Prime Minister Narendra Modi had asked people to light diyas or torch to show a ‘collective resolve’ against the Coronavirus.

Anant Karmuse (40), a resident of Ghodbunder had posted a photo morphed with Awhad’s face and a lit-up match stick with a caption, “I protest (nished) against the person who has edited the photo.”

Karmuse also alleged that he was beaten with a bamboo stick and belt in front of the police and the minister.

Speaking to Mirror Online, Karmuse said, “On Sunday night, I had posted an image after Deep Utsav. Around 12 am, two policemen, came to my house and said that they wanted to take me to the police station as their superior wanted to enquire about some case. However, when I asked them about the case, they refused to say anything. I told them that I will come to the police station tomorrow. However, they continued to insist on my presence immediately.”

“When I asked them to connect me with their senior,” Karmuse said, “The cops who had come to pick me, said the officer must be sleeping and they don’t want to disturb him. When I questioned how can he question me when he is sleeping, they insisted that I should come to the police station. Later, I agreed but said that my wife will also come, however, they did not let her accompany me.”

Karmuse alleged that the attitude of the police changed as soon as they came downstairs.

“When I went downstairs, I told them that I will take my car, however, the police changed their attitude and dragged me into their Scorpio. There were a total of six men in the car. They even snatched my phone.”

“Upon reaching there, 10 to 15 men were already present, the security guard informed the minister and soon those men started beating me. They thrashed me with lathis, belt, and bamboos after the stick broke.”

Alleging that police told those men not to beat him on the face,” he said, “The minister called him and told him to delete the post and apologize.”

The victim was later taken to Vartak Nagar police station where the officers told the cops to take him to hospital for treatment.

“We have to be together in the fight (against COVID-19). If Awhad can say anything he wants about the Prime Minister, can’t I express my view?” said Karmuse.

When contacted, Thane police PRO, Sukhada Narkar told Mirror Online that an FIR has been registered against unknown people following the complaint. “Our investigations are in progress,” she said.

Slamming PM Modi’s ‘light’ call on April 5, Awhad had said, “The whole world is fighting a fierce battle against COVID-19. Governments, doctors, scientists, paramedics are dropping everything else and are focused on this. And the PM of India asks people to light lamps and candles. Is this some kind of a joke.”

In the last two days, the police had gone to the engineer’s home to take CCTV footage from his building premises.

Kurmuse said that he should get justice as a common man and has filed a complaint at Vartak Nagar police station.

Former NCP leader and BJP MLC Niranjan Davkhare also took to Twitter to show how the man was beaten brutally and said that no action was taken against Awhad’s ‘goons’.

“NCP goons of Min Jitendra Awhad abducted thane citizen for Tweeting different view with the minister, was beaten in front of Awhad by 15 ppl, No action taken against such criminal behavior. Is this democracy?,” Davkhare tweeted.

Several calls made to Jitendra Awhad for his reaction went unanswered, while there was no response to the SMS.

However, taking to Twitter, Awhad posted a screenshot of a photo that was morphed and said, “Do you support this pervert. Will you tolerate this done against you or your family member. I don’t support lawlessness.

Replying to Davkhare’s Tweet, he questioned what he would have done if something similar had been done to his leader. “Earlier, people would be put in jail even if they spoke against your leadership.”

This story was first published in Mumbai Mirror.

Share this on WhatsApp
Tags:Anant KarmuseAssaultGhodbunderJitendra AwhadMaharashtra ministerNarendra ModiNCPNiranjan DavkhareThane
previous article
Covid-19 | We are running out of money, don’t have jobs: Several Indians stuck in Ireland seek to return home
next article
‘Don’t expect salaries until work starts’: Over 200 employees left in the lurch amid lockdown 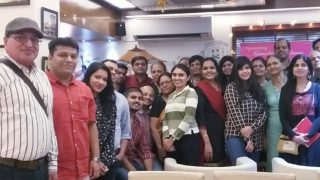 You, Me and Poetry: A meet of young and old that encourages, nurtures and nourishes talent