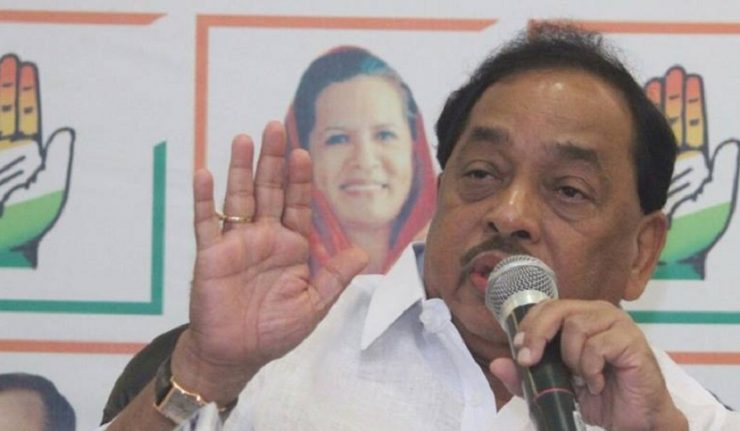 Senior Congress leader and former Maharashtra Chief Minister Narayan Rane on Thursday announced his exit from the grand old party he had joined 12 years ago.

Hitting out at top party leaders for humiliating him, the Maratha leader said that now he is Congress ‘mukt’ and have no relation with the grand-old-party.

Rane also hit out at Congress for not fulfilling the promise of making him Chief Minister.

He accused the state Congress chief Ashok Chavan of being in the national capital for two days so that Rane is denied a ticket for  Member of Legislature post.

“Ashok Chavan is my friend, he is not my enemy, but he isn’t qualified as state Congress chief,” said Rane.

Rane also said that he was promised three times to be made CM, but even after an year he did not get the post. “48 legislators supported me as their choice for CMs’s post, but Ashok Chavan was made.”

Stating that he will announce his future move before Dusshera, Rane also claimed that he has offers from several parties. There has been speculation for quite some time that Rane may join the ruling BJP.

Before joining politics, Narayan Rane was a member of the Harya-Narya gang, which was active in Chembur, in north-east Bombay in the 1960s. In his early twenties, Rane entered politics to take on rival gangsters and joined Shiv Sena. With time, Rane, who started his journey as a ‘shakha pramukh’, was promoted in the party, and since then he has climbed the ladder of success.

The growing popularity of Rane as a young dynamic leader caught the eyes of Shiv Sena supremo Bal Thackeray. With the exit of Chagan Bhujbal from the Shiv Sena in 1991, Rane gradually rose up the party ranks. He worked at various positions, including municipal corporator, MLA and minister. In 1999, when Manohar Joshi stepped down from the post of Chief Minister of Maharashtra, Narayan Rane succeeded him.

After Uddhav Thackeray was chosen as the working president of the Shiv Sena, Rane publicly criticised the decision and differences arose within the party as he questioned Uddhav’s administrative abilities. Because of this, Rane was expelled on July 3, 2005 from the party in which he had spent 39 years of his political career. Subsequently, he also resigned from the Maharashtra Legislative Assembly.

In 2005, Rane joined the Congress after he quit the Shiv Sena, with the expectation that he would get the chief minister’s chair. Soon after, Rane was handed over the charge of Revenue minister on August 16, 2005, succeeding Patangrao Kadam.

Rane sought re-election from his Malvan seat in the Konkan region on a Congress ticket and won with a margin of over 50,000 votes despite a well-fought and organised campaign by the Shiv Sena. Shiv Sena candidate Parshuram Uparkar even lost his deposit. It was the first time in the history of Shiv Sena that the rebel had won. Later, Rane was roped in as the Industries minister of the state.

► Rane suspended from the Congress

Rane was suspended from the Congress party in 2008, when he had attacked Congress president Sonia Gandhi after failing to become chief minister of Maharashtra, following the removal of Vilasrao Deshmukh which saw Ashok Chavan getting the coveted job in the state. But his suspension was revoked after a few months.

► Launched his own newspaper Prahaar

In October 2008, Rane launched the Marathi daily Prahaar, under the banner of Rane Prakashan Pvt Ltd

Rane, who was upset with the party’s central leadership, which had not been paying attention to his demand of overhauling the party before the Assembly polls, submitted his resignation as the Maharashtra Industries Minister to Chief Minister Prithviraj Chavan. But he said that he would continue to be part of the Congress party.

Rane criticised Chief Minister Prithviraj Chavan over his functioning, saying public work projects were consistently delayed. Implementation on decisions taken three years ago are still pending. There is a problem in the administrative functioning and government officials are not working efficiently, said Rane.

1985 to 1990: Corporator of the Shiv Sena and was also appointed as the President of ‘BEST’

1990-95: Also served as the Leader of Opposition in the Legislative Assembly

1996-99: Appointed as the Revenue Minister during Sena-BJP regime

1999: Appointed as the Chief Minister of Maharashtra

2005: Elected to Maharashtra Assembly with a huge margin from Malwan constituency.

2005: Appointed as the Revenue Minister

2009: Was appointed as Industries Minister

2014: After the defeat of his son Nilesh Rane in the Lok Sabha election, resigned from the post of Industries minister

July 2014: Submitted his resignation for the second time, but withdrew it within a fortnight.

October 2014: Lost from Kudal assembly constituency. He was defeated by Shiv Sena’s Vaibhav Naik by more than 9,000 votes.

September 2017: Rane resigned from the primary membership of the Congress. He also stepped down from his seat in the Legislative Council

Share this on WhatsApp
Tags:Ashok ChavanBJPCongressMLCNarayan RanePolitical JourneyResignationShiv Sena
previous article
3 years of Modi govt: With no concrete narrative, Opposition can’t stop the Modi juggernaut for now
next article
Elphinstone Stampede | Why does it take deaths for authorities to wake up and fix long demanded issues?