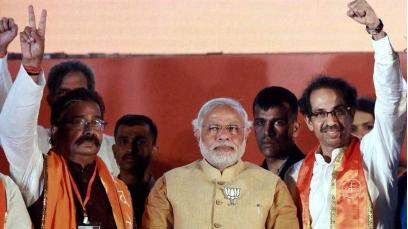 Failing to bury their differences over seat-sharing, the Shiv Sena and the Bharatiya Janata Party (BJP), who made up one of the oldest political alliances in the country, finally parted ways on Thursday, and will contest the Maharashtra assembly polls on their own.

Speaking to the media, BJP state president  Devendra Fadnavis said, “We have conveyed our decision to Shiv Sena. However, we will continue our alliance with the Swabhimani Shetkari Sanghatna, Rashtriya Samaj Party and Shiv Sangram Sanghatna . We had a view that our smaller allies must be kept with us, but Shiv Sena was adamant about their proposal.”

“Shiv Sena was only concerned about the chief minister post and their quota of seats. Also, there was not much difference in Shiv Sena’s earlier and new proposal,” Fadanvis said.

Senior BJP leader Eknath Khadse said, “Many proposals were discussed in the last 20 days, but keeping in view the time constraint, the core committee has decided to end our 25 year old alliance. BJP will now take steps towards a Congress-free Maharashtra, on its own.”

“Since the time of our alliance till date, we have contested the Lok Sabha, Vidhan Sabha and local self government body elections together. Because of Gopinath Munde ji the Sena-BJP alliance was converted into ‘ Mahayuti’. But this time, the Sena did not give us a suitable proposal,” he added.

Smaller partners ( Swabhimani Shetkari Sanghatna, Rashtriya Samaj Party and Shiv Sangram Sanghatna) of the ‘Mahayuti’, who had been threatening to quit the ‘Mahayuti’ had stayed back in ‘Mahayuti’ on Wednesday evening – proposing a new formula of 150 seats for Sena, 120 seats for BJP and 18 seats for the alliance partners. However, later in the night alliance partners scaled down their demand from 18 seats to 14 to keep the ‘Mahayuti’ intact. But both the parties, who were caught in a tug of war over seat sharing for over three weeks decided to break the alliance as Shiv Sena remained firm on contesting 151 seats.

Even though an editorial in ‘Saamana’, claimed “whatever happens, the allies will be with Sena,” all three alliance partners have now decided to go with the BJP.

The Sena, who had offered 119 seats for the BJP wanted them to allot seats to other alliance parties from those 119 seats.

However, on August 21, making a last attempt to keep the alliance intact, Sena chief Uddhav Thackeray in an executive meet of Sena leaders took a step back and proposed a new ‘final formula’ suggesting 119 seats for the BJP, 151 seats for the Sena, and 18 seats allocated to the four alliance partners from the Sena’s own quota. However the BJP was not ready to compromise on its demand and reacted saying that there is no such thing called a final proposal.

While on the same day, BJP leader Vinod Tawde had said, “The formula proposed by the Sena is not new and we are not happy about the proposal. We want a discussion to be held on the 59 seats which the Sena and 19 seats which the BJP have not won till date. If we discuss these seats, it will benefit the alliance. The decision on the alliance will be taken in the next 24 hours.”

After a thumping victory in the 2014 Lok Sabha elections, the BJP had demanded 130 seats in Maharashtra, mentioning that it had won 46 seats in the 2009 Maharashtra assembly polls, which was more than that of the Sena, even after they contested fewer seats.

However, the recently concluded by-poll results of the three Lok Sabha and 29 assembly seats, where the BJP did not do as well as expected, had given the Shiv Sena an upper hand. Sena leaders had given the final authority to party chief Uddhav Thackeray to decide on the fate of the alliance.

Setting itself on a confrontational path, the BJP on August 18 had also given the Shiv Sena an ultimatum to agree on a seat-sharing formula for the upcoming assembly elections or face a breakdown of the alliance. The BJP’s ultimatum had come against the backdrop of party president Amit Shah’s tough talk in Kolhapur in Maharashtra, where he said that there would be no compromise at the cost of self respect. Reiterating that the BJP had to be brought to power in Maharashtra, Shah, BJP’s national president and the strategist forNarendra Modi’s election campaign, did not even name the Shiv Sena in his speech in Pune.

In the 2009 elections, the BJP had contested 119 seats, while the Sena had contested 169, down by two from its 2004 quota. However, this time, the alliance “Mahayuti” was broad based, with the inclusion of four more parties – RPI (Athawle), Rashtriya Samaj Paksha, Swabhimani Shetkari Paksha and Loksangram.

With the breakup of the 25-year-old alliance, political analysts feel that the equations of the Maharashtra assembly will change at large.